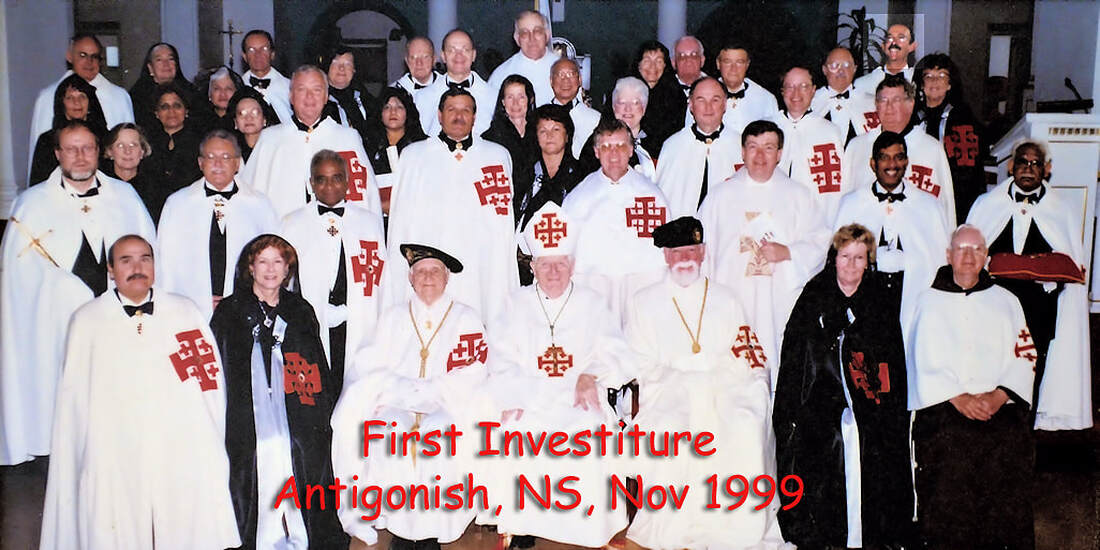 History of the ​Lieutenancy

The beginnings of the Magistral Delegation of the Equestrian Order of the Holy Sepulchre of Jerusalem (EOHSJ) Canada-Atlantic goes back a number of years - but, that's another story. The concrete history begins with an exchange of correspondence between a few interested people in the Diocese of Antigonish and the Lieutenancy of Canada-Toronto in 1999.​ 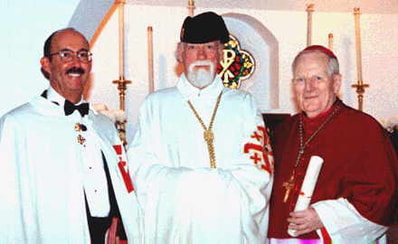 In May 1999, the Most Reverend Colin Campbell, Bishop of the Diocese of Antigonish was invested as a Knight Commander with Star, also known as a Knight Grand Officer, together with J. Stewart LeForte, of Little Bras d'Or, Nova Scotia, who was invested as Knight. His Eminence, Aloysius Cardinal Ambrozic, Grand Prior of the Lieutenancy of Canada-Toronto was the Investing Prelate.

At the Investiture Stewart LeForte, KHS, was appointed Atlantic Canada Section President of the Canada-Toronto Lieutenancy with H.E. Most Reverend Colin Campbell, KGOHS, being appointed Prior of the Section. For nearly six months there were only two members of the newly created Section. However, the Section held its first Investiture at Saint Ninian Cathedral in Antigonish, NS. H.E. Gerald Guest, Lieutenant, Dame Marilyn Guest, LC*HS, and a large contingent of Knights and Dames from Toronto and the Eastern Ontario Section were present for this historical event. H.E. Most Reverend Colin Campbell, KGOHS, was the presiding celebrant.​

​The Investiture activities began with the traditional Investiture Vigil, recalling the ancient ritual of maintaining a vigil the night before one's investiture as a Knight. The Vigil was held at Mount Saint Bernard Chapel the campus of St. Francis Xavier University. The Sisters of the Congregation were gracious in providing their chapel for the Vigil. A black tie banquet followed at the Greenway Claymore Inn for those being invested, their special guests and the visiting Knights and Dames from the Lieutenancy of Canada-Toronto. Also on hand were H.E. Dr. Bernard Ficcara, KGCHS, (Lieutenant of Honour) and Dame Jean Ficcara, LGCHS who travelled from the United States to be present at the first Investiture of the Atlantic Canada Section.

The Investiture was held on Sunday at 2:00 pm in Saint Ninian Cathedral. Among those invested were Dorothy Brocklehurst, Barry Gabriel, Dr. Thomas Gaskell, Vincent MacLean and Joseph MacMullin, together with some members from the Eastern Ontario Section. The Investiture was followed by the traditional black tie banquet at which friends and family members of those invested gathered to celebrate and honour those who were invested. With this first Investiture the Atlantic Canada Section became a reality in fact as well as in name. The members met on a monthly basis in Sydney with the Section President and the Grand Prior to learn more about the Order and to discuss the situation in the Middle East.

The second Investiture, again held in Antigonish, was the source of great joy with the expansion of the Order to include members from the Archdiocese of Halifax. H.E. Archbishop Terrence Prendergast, SJ, Archbishop of Halifax, was the special guest speaker at the Investiture Banquet. Among those invested were: Mary Augusta "Gussie" MacIntyre, Sydney; Dr. Patrick Atherton, Halifax; Dr. Charle V. Keating, Dartmouth; and Duncan MacIntyre, Sydney. H.E. Dr. Gerald Guest, Canada-Toronto Lieutenant was joined by a number of Knights and Dames who travelled from Ontario to be present for this Investiture. Professor Michael MacDonald, who was teaching in Cairo at the time of the October Investiture was invested at a special ceremony held at Holy Angels Convent Chapel in Sydney in early December 2000.

​The third and final Investiture of the Section, as a Section of the Canada-Toronto Lieutenancy was held at Saint Mary's Cathedral Basilica in Halifax. The Vigil was held on Saturday evening in the Basilica and this was followed by a banquet at the Halifax Westin. The Prior of the Section, presided at the Vigil Service. His Grace, Archbishop Terrance Prendergast, SJ, presided at Investiture Mass with H.E. Most Reverend Colin Campbell, KGOHS, presiding at the Investiture of the new knights.

The last members to be invested into the Atlantic Canada Section were: Jon Bekkers, Halifax; Michael Foran, Halifax; Kenneth P. Graham, Halifax; Margaret A. MacDonald, Sydney; Professor Reverend Father Marc Smith, CSC, Fredericton, New Brunswick; and the Very Reverend John Williams, Rector of Saint Mary's Cathedral Basilica, Halifax. Special guests included: Brian Noonan, KCHS and Cross of Merit of the EOHSJ, who represented H.E. Augustine Arrigo, Canada-Toronto Lieutenant (who was unable to be present); Brian Mallon, KGOHS, Secretary of the Lieutenancy of Scotland; Sir James and Dame Anna Meyer of Toronto, members of the Lieutenancy of Canada-Toronto; Archbishop James Hayes, Archbishop Emeritus of Halifax, and Archbishop Austin Burke, Archbishop Emeritus of Halifax.
​
The conclusion of the Investiture Banquet was marked by the formal proclamation of the establishment of the Magistral Delegation of the EOHSJ for Canada-Atlantic. Brian Noonan, KGOHS, KM, Section President for Eastern Ontario read the decrees on behalf of H.E. Augustine Arrigo, who was unable to be present. Carlos Cardinal Furno, Grand Master of the Equestrian Order of the Holy Sepulchre of Jerusalem, appointed H.E. Most Reverend Colin Campbell, KC*HS, as the Grand Prior of the newly created Magistral Delegation. Stewart LeForte was appointed Lieutenant of the Magistral Delegation.

​Members of the Lieutenancy of Canada-Atlantic are especially grateful to H.E. Dr. Gerald Guest, then Lieutenant of Canada-Toronto, for his dedication and foresight in creating the Atlantic Canada Section and in guiding it to the point where it could become an independant Magistral Delegation reporting directly to Rome. As well, special mention must be made of H.E. Augustine Arrigo, Lieutenant of Canada-Toronto and His Emminence, Aloysius Cardinal Ambrozic, for recommending and approving the establishment of the new Magistral Delegation. Our sincere gratitude is also extended to the members of the Lieutenancy Council who assisted the Section in so many ways. Special mention must be made of Sir Patrick Rodriques, Lay Knight Master of Ceremonies for the Investitures in Antigonish and former member of the Council of the Canada-Toronto Lieutenancy.